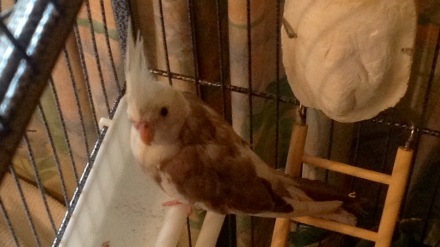 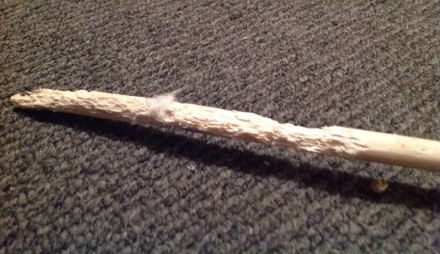 I thought it was birch

Manu chewed right through his perch

Must have been balsa

Despite my distaste of keeping animals in cages, I decided to buy a budgie. Despite my decision to buy a budgie, I bought a 3-month old hand-raised cockatiel. it was love at first cuddle. How can you not fall in love with a cockatiel sitting on your shoulder, pulling your hair? His name shall be Manu¹. A hand-raised bird is much more sociable (and expensive) than an aviary bird: The bird is already tame and will bond with its new human-companion much faster.

In the roughly 24 hours that Manu has been here, he has pooped on one of my chairs and one of my friends. I suspect that he is a little pissed-off over his abrupt change in living quarters and family, so I’m resisting the urge to handle him too much whilst he settles in. I want him to feel comfortable and at-home before he becomes acquainted with – and attempts to poop on – the cat. He has broken tapu² already by sitting in both his seed-bowl and water-bowl, but It’s good to see him eating and drinking while he gets familiar with his new lodgings.

1. Manu is the Mäori word for bird, but it also used as a name.
2. Tapu is a Mäori word that roughly translates to sacred or forbidden, depending on context.